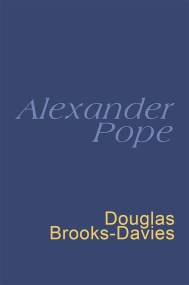 Chief satirist of the Augustan age, as seen in The rape of the Lock, Pope spoke out against society and his profession, in poetry of…