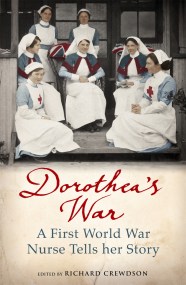 The evocative diaries of a young nurse stationed in northern France during the First World War, published for the first time. A rare insight into…