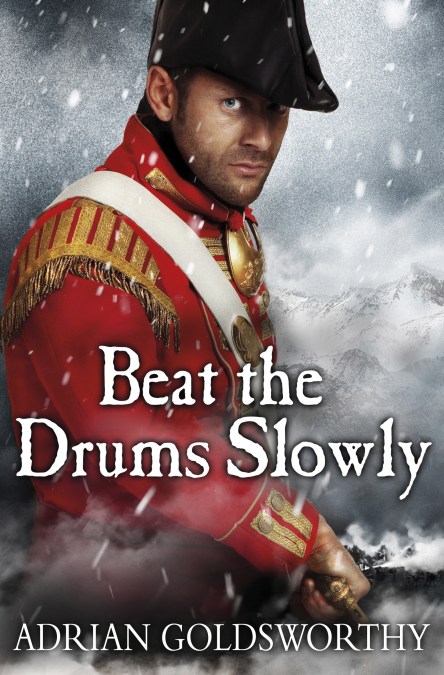 Second in the series begun by TRUE SOLDIER GENTLEMEN, the story takes our heroes through the winter snows as Sir John Moore is forced to retreat to Corunna. Faced with appalling weather, and pursued by an overwhelming French army led by Napoleon himself, the very survival of Britain’s army is at stake.

But while the 106th Foot fights a desperate rearguard action, for the newly promoted Hamish Williams, the retreat turns into an unexpectedly personal drama. Separated from the rest of the army in the initial chaos, he chances upon another fugitive, Jane MacAndrews, the daughter of his commanding officer, and the woman he is desperately and hopelessly in love with. As the pair battle the elements and the pursuing French, picking up a rag-tag band of fellow stragglers along the way – as well as an abandoned newborn – the strict boundaries of their social relationship are tested to the limit, with surprising results.

But Williams soon finds he must do more than simply evade capture and deliver Jane safe and sound to her father. A specially tasked unit of French cavalry is threatening to turn the retreat into a massacre, and Williams and his little band are the only thing standing between them and their goal. 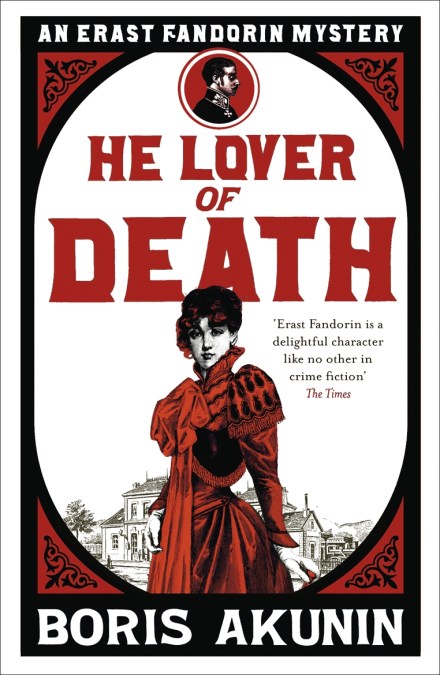 He Lover of Death

Senka Skorikov, orphan and urchin, has been abandoned to the murky world of Moscow’s gangster district. While picking a pocket or two, he glimpses the most beautiful woman he has ever seen, and joins the gang of her overlord lover, The Prince, so desperate he is to meet her. Senka climbs the criminal ranks, uncovering a stash of precious metal, and gradually capturing the heart of his beloved Death – so named for the life expectancy of her lovers. But as the bandit community balks at his success on both fronts, threats on his life begin to pour in .

A dandy and his ‘Chinese’ sidekick seem to be taking an inordinate interest in Senka’s welfare, and it becomes clear that those threatening Senka are linked to a spate of murders, grizzly even by underworld standards. Fandorin must unweave a tangled web of narcotics, false identities and organised crime – but can he survive an encounter with the ever-alluring Death unscathed? Find out in the darkest Fandorin to date! 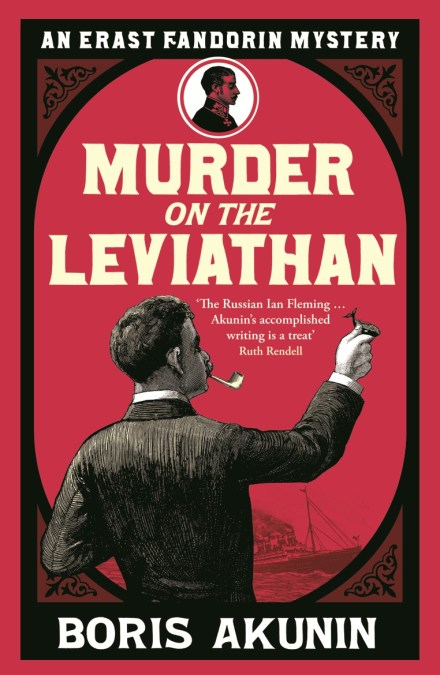 Murder on the Leviathan

On 15th March 1878 Lord Littleby, an English eccentric and collector, is found murdered in his Paris house together with nine members of his staff. A gold whale in the victim’s hand leads Erast Fandorin to board the Leviathan, the world’s largest steamship, as the murderer is one of the 142 first class passengers.

Commissioner Gauche of the French police has narrowed down the suspects to ten, and they are forced to eat together at every meal time in the ship’s Windsor Suite until ‘the Crime of the Century’ is solved. But is the murderer really at the table, and can Erast Fandorin discover his or her identity before Gauche? As more passengers are murdered and the Leviathan heads towards Calcutta, Fandorin needs all his investigative skills to find the truth. 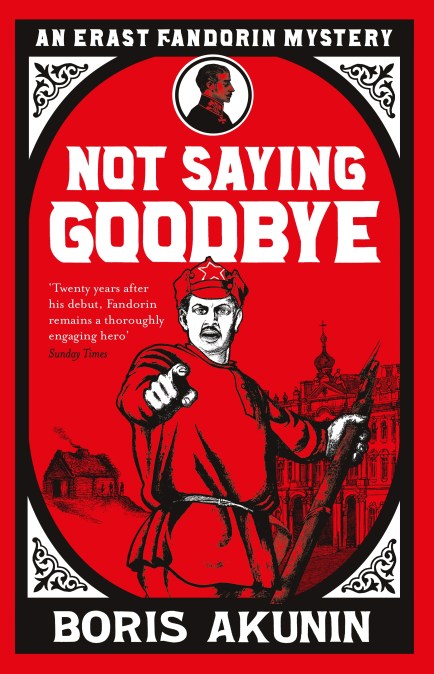 The young Soviet state is in turmoil. Chekists walk along the streets. Hunger, cold and mud crawl away in the former aristocratic quarters of Moscow. The old order has been turned upside down, leaving room for political infighting and dark subterfuge.

This is the world Erast Fandorin – the celebrated detective – wakes up to after three years in a coma. His faithful assistant Masa might have nursed him successfully back to life, but there is no guarantee that the old Fandorin, with his razor-sharp intellect and superhuman strength, will ever be back.

Determined to leave behind Moscow – a city he doesn’t recognise anymore – Fandorin embarks on one last great adventure. But who can he trust in a country torn apart by civil war? 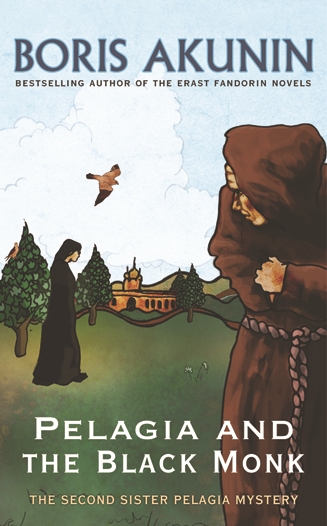 Pelagia And The Black Monk

by Boris Akunin
Sister Pelagia, bespectacled, freckled, woefully clumsy and possessed of a not very nunnish aptitude for solving crimes, returns in a tale of monastic intrigue, murder and adventure.

Just as the dust from the case of the White Bulldog begins to settle in the small Russian town of Zavolzhsk, its sleepy rural existence is shaken up once again by the arrival of a desperately frightened monk who seeks the help of the bishop, Mitrofanii.

The monks have been troubled by visions of a dark, hooded figure that appears to walk on the waters of the vast Blue Lake surrounding their monastery. Sceptical of ghost stories, Mitrofanii sends first his clever young ward, then two of his most trusted advisors, to investigate the mystery. All meet with unexpected fates.

Finally Sister Pelagia takes matters into her own hands and, adopting a number of ingenious disguises, she ventures across the Blue Lake in search of answers. As she delves deeper into the layers of secrecy that cloak the islanders, and as the body count continues to rise, Pelagia begins to realise that an encounter with a ghost may be the least of her problems… 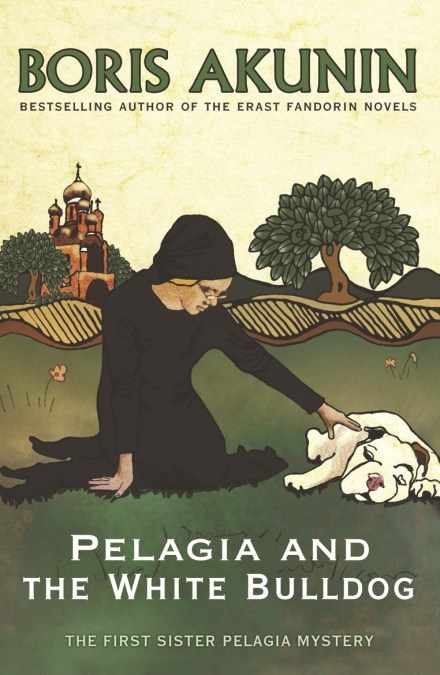 Pelagia and the White Bulldog

In the dying days of the nineteenth century, the small Russian town of Zavolzhsk is shaken out of its sleepy rural existence by the arrival from St Petersburg of a Synodical Inspector with a hidden agenda and a dangerously persuasive manner.

Meanwhile, in the nearby country estate of Drozdovka, one of the prized white Bulldogs – prized because of its one brown ear, and its propensity to drool – belonging to the cantankerous lady of the house has been poisoned. The old widow has taken to her bed, sick with fear that her two remaining dogs may face a similar fate, and the many potential beneficiaries of her will wait fretfully to see whether or not she will recover.

Sister Pelagia: bespectacled, freckled, woefully clumsy and astonishingly resourceful is summoned by the Bishop of Zavolzhsk to investigate the bulldog’s death. But her investigation soon takes a far more sinister turn when two headless bodies are pulled out of the river on the edge of the estate. 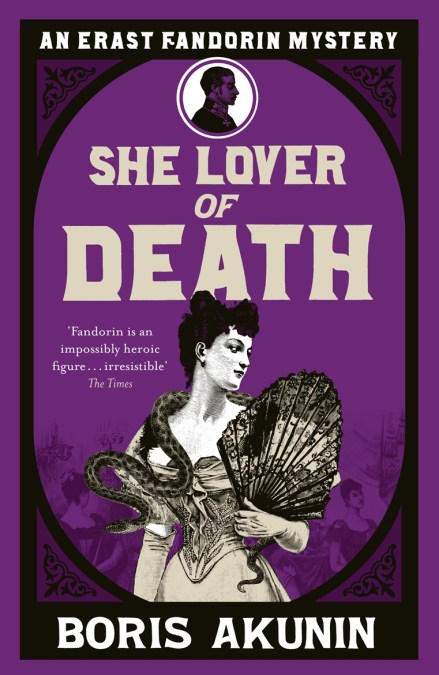 She Lover Of Death

by Boris Akunin
Can Fandorin infiltrate a secret society to save Moscow’s youth? A dark and decadent detective story from the master of Russian crime fiction.

There’s been rising concern in Moscow over a wave of suicides among the city’s young bohemians. An intrepid newspaper reporter, Zhemailo, begins to uncover the truth behind the phenomenon – that the victims are linked by a secret society, the Lovers of Death. But Zhemailo is not the only investigator hot on the heels of these disciples of the occult. Little do they realise that the latest ‘convert’ to their secret society, assuming the alias of a Japanese prince, is none other than Erast Fandorin.

But when a young and naïve provincial woman, Masha Mironova, becomes embroiled in the society, and Zhemalio dies a mysterious death, Fandorin must do more than merely infiltrate and observe. Especially when the spin of the Russian roulette wheel decrees that our dashing hero be the next to die by his own hand. Can Fandorin fake his own demise, all while outwitting the cult’s dastardly leader? 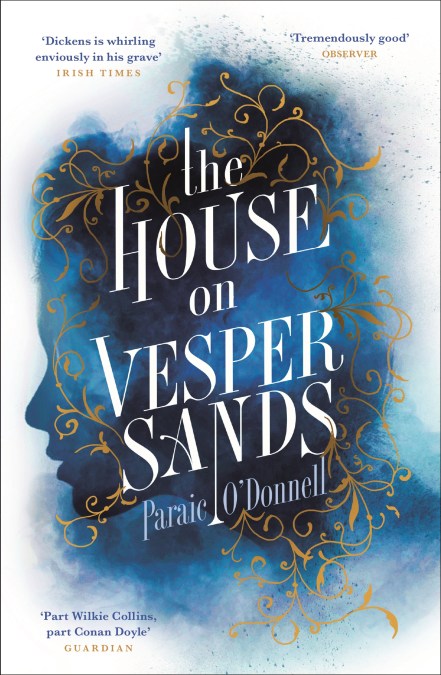 The House on Vesper Sands

‘Tremendously good’ Observer
‘The most vivid and compelling portrait of late Victorian London since The Crimson Petal and the White‘ Sarah Perry
‘Part Wilkie Collins, part Conan Doyle’ Guardian
‘Huge fun’ Daily Mail
‘Has everything you could want in a novel’ Stylist
‘Dickens is whirling enviously in his grave … Read by a fire on a cold winter evening’ Irish Times

‘Ladies and gentlemen, the darkness is complete.’

It is the winter of 1893, and in London the snow is falling.

It is falling as Gideon Bliss seeks shelter in a Soho church, where he finds Angie Tatton lying before the altar. His one-time love is at death’s door, murmuring about brightness and black air, and about those she calls the Spiriters. In the morning she is gone.

The snow is falling as a seamstress climbs onto a ledge above Mayfair, a mysterious message stitched into her own skin. It is falling as she steadies herself and closes her eyes.

It is falling, too, as her employer, Lord Strythe, vanishes into the night, watched by Octavia Hillingdon, a restless society columnist who longs to uncover a story of real importance.

She and Gideon will soon be drawn into the same mystery, each desperate to save Angie and find out the truth about Lord Strythe. Their paths will cross as the darkness gathers, and will lead them at last to what lies hidden at the house on Vesper Sands. 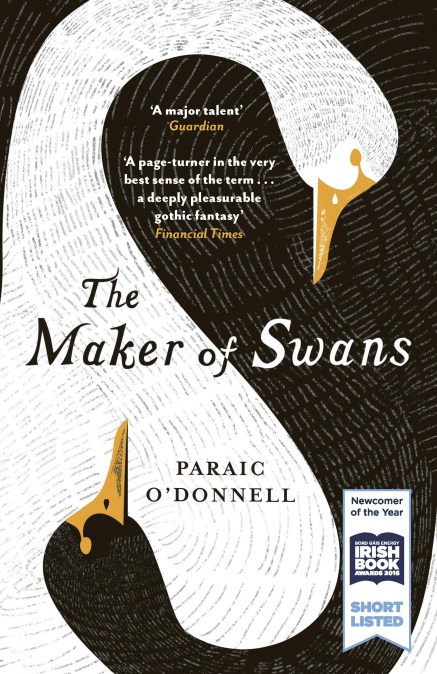 The Maker of Swans

The world had forgotten Mr Crowe and his mysterious gifts. Until he killed the poet.

He lived a secluded life in the fading grandeur of his country estate. His companions were his faithful manservant and his ward, Clara, a silent, bookish girl who has gifts of her own.

Now Dr Chastern, the leader of a secret society, arrives at the estate to call Crowe to account and keep his powers in check. But it is Clara’s even greater gifts that he comes to covet most.

She must learn to use them quickly, if she is to save them all.