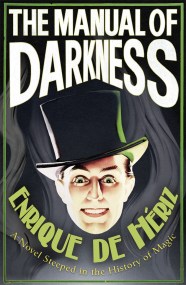 The Manual of Darkness

The world's best magician is going blind, but is there a story in his past that can save him? Victor Losa has spent his life…