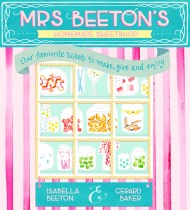 As a nation, there is no denying that we have a sweet tooth - and classic treats such as sherbet fruit drops, Everton toffee, vanilla…