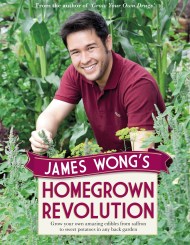 A revolution in the garden - a completely new range of fruit and vegetables to grow and eat. Whether it's a window box of homegrown…