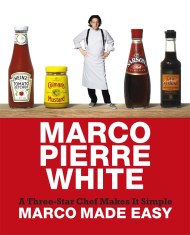 This book is all about creating beautiful and delicious food...without stress and without fuss. Marco Pierre White serves up more than 100 recipes and shows…