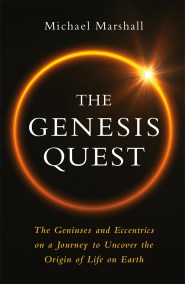 'The story of the quest to understand life's genesis is a universal one, in which everyone can find pleasure and fascination. By asking how life…