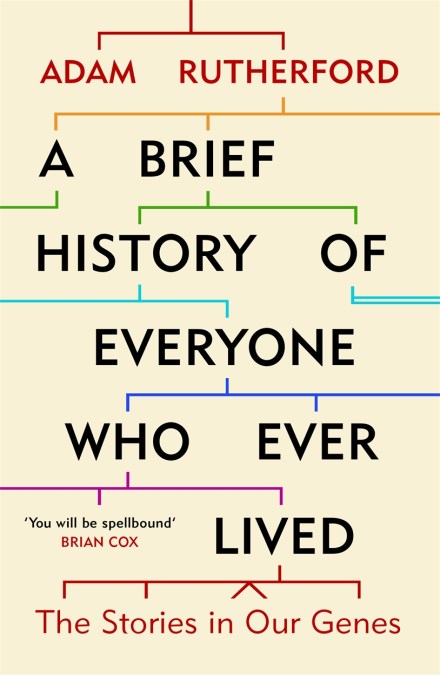 A Brief History of Everyone Who Ever Lived

This is a story about you.

It is the history of who you are and how you came to be. It is unique to you, as it is to each of the 100 billion modern humans who have ever drawn breath. But it is also our collective story, because in every one of our genomes we each carry the history of our species – births, deaths, disease, war, famine, migration and a lot of sex.

In this captivating journey through the expanding landscape of genetics, Adam Rutherford reveals what our genes now tell us about human history, and what history can now tell us about our genes. From Neanderthals to murder, from redheads to race, dead kings to plague, evolution to epigenetics, this is a demystifying and illuminating new portrait of who we are and how we came to be.

‘An extraordinary adventure…From the Neanderthals to the Vikings, from the Queen of Sheba to Richard III, Rutherford goes in search of our ancestors, tracing the genetic clues deep into the past’ Alice Roberts 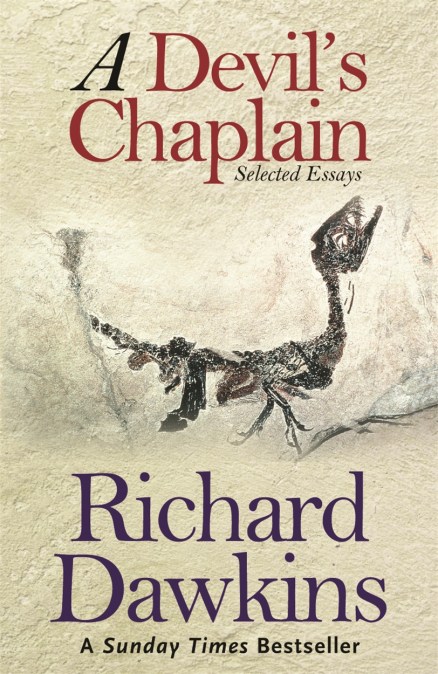 by Richard Dawkins
Richard Dawkins is one of the finest minds in science, and in this superb collection of essays and letters, he demonstrates the depth of his knowledge and the rich variety of his interests. Whether he is examining postmodernism or the Human Genome Project, penning a letter to his daughter, or writing a moving eulogy to Douglas Adams and e-mailing Stephen Jay Gould, Dawkins writes with an intellectual vigour and grace that is second to none. This is a very human collection that shows not only the acuity of Dawkins’ scientific mind, but also his sense of humour and the warmth of his relationships with friends and family. 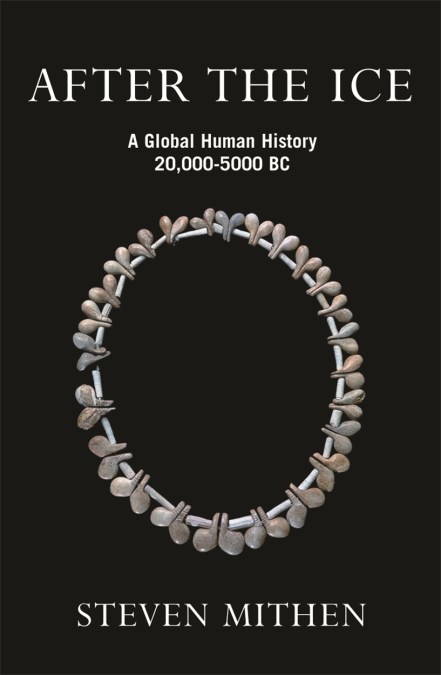 by Steven Mithen
A fantastic voyage through 15,000 years of history that laid the foundations for civilisation as we know it by award-winning science writer Steven Mithen.

Twenty thousand years ago Earth was in the midst of an ice age. Then global warming arrived, leading to massive floods, the spread of forests and the retreat of the deserts. By 5,000 BC a radically different human world had appeared. In place of hunters and gatherers there were farmers; in place of transient campsites there were towns. The foundations of our modern world had been laid and nothing that came after – the Industrial Revolution, the atomic age, the internet – have ever matched the significance of those events.

AFTER THE ICE tells the story of climate change’s impact during this momentous period – one that also saw the colonisation of the Americas and mass extinctions of animals throughout the world. Drawing on the latest cutting-edge research in archaeology, cognitive science, palaeontology, geology and the evolutionary sciences, Steven Mithen creates an evocative, original and remarkably complete picture of minds, cultures, lives and landscapes through 15,000 years of history. 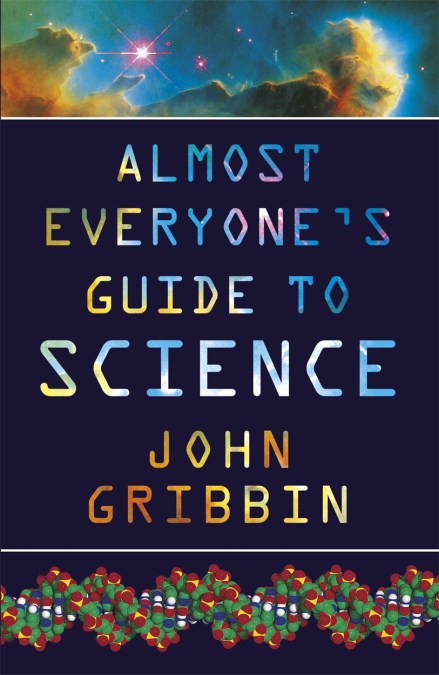 by John Gribbin
John Gribbin is one of the few science writers who is equally comfortable writing about biology as he is about physics, and this beginner’s guide will take the reader through the basics and the fundamental issues of the crucial areas of modern science, from the birth of the universe through to the evolution of our own species, the nature of human behaviour and the workings of our minds.

Crucially, the book will not only provide an overview of the central areas in a single volume, but will also explain how the areas link up, what evolutionary theory has to say about how we think, how sub-atomic particles came into being in the Big Bang and atoms in stars. 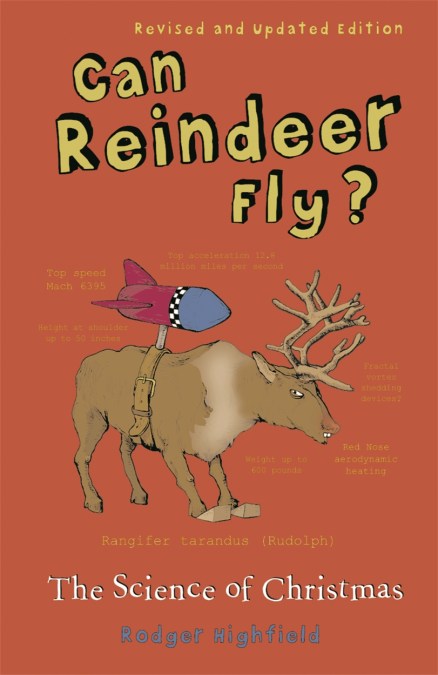 by Roger Highfield
How does snow form? Why are we always depressed after Christmas? How does Santa manage to deliver all those presents in one night? (He has, in fact, little over two ten-thousandths of a second to get between each of the 842 million households he must visit.)

This book contains information on how drugs might make us see flying reindeer, how pollution is affecting the shape of Christmas trees, and the intriguing correlation between the length of our Christmas card list and brain size. 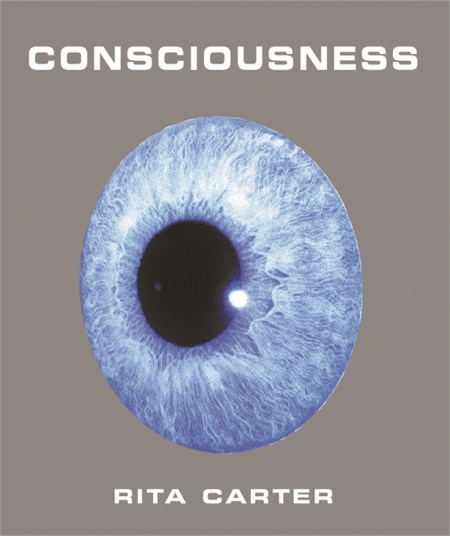 by Rita Carter
A guide to the hardest problem in science: the nature of consciousness.

Is consciousness merely an illusion, a by-product of our brain’s workings, or is it, as the latest physics may suggest, the basis for all reality? Your perception of the world around you, your consciousness, should be the one thing you could talk about with absolute confidence. But nothing about consciousness is clear-cut and understanding it is perhaps the hardest problem facing modern science.

But some extraordinary insights gathered by the latest research suggest that the answers are within our grasp. Building on the success of her bestselling book MAPPING THE MIND, Rita Carter gathers these insights together to throw a new light on consciousness, its nature, its origins and its purpose. 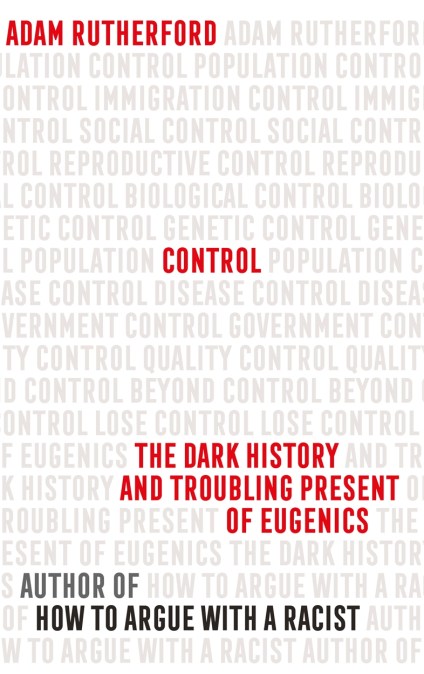 Throughout history, people have sought to improve society by reducing suffering, eliminating disease or enhancing desirable qualities in their children. But this wish goes hand in hand with the desire to impose control over who can marry, who can procreate and who is permitted to live. In the Victorian era, in the shadow of Darwin’s ideas about evolution, a new full-blooded attempt to impose control over our unruly biology began to grow in the clubs, salons and offices of the powerful. It was enshrined in a political movement that bastardised science, and for sixty years enjoyed bipartisan and huge popular support.

Eugenics was vigorously embraced in dozens of countries. It was also a cornerstone of Nazi ideology, and forged a path that led directly to the gates of Auschwitz. But the underlying ideas are not merely historical. The legacy of eugenics persists in our language and literature, from the words ‘moron’ and ‘imbecile’ to the themes of some of our greatest works of culture. Today, with new gene editing techniques, very real conversations are happening – including in the heart of British government – about tinkering with the DNA of our unborn children, to make them smarter, fitter, stronger.

CONTROL tells the story of attempts by the powerful throughout history to dictate reproduction and regulate the interface of breeding and society. It is an urgently needed examination that unpicks one of the defining and most destructive ideas of the twentieth century. To know this history is to inoculate ourselves against its being repeated. 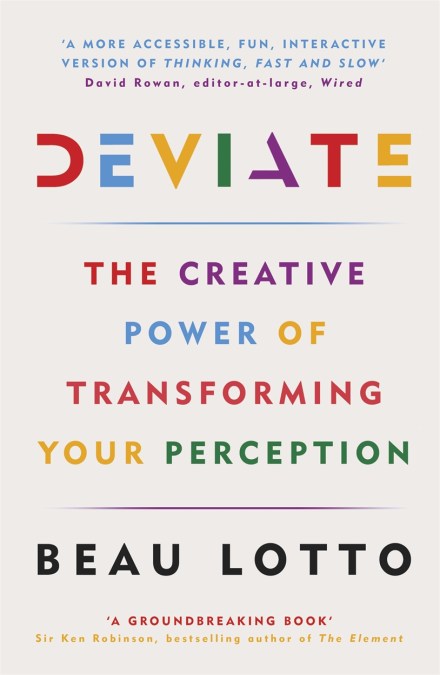 by Beau Lotto
World-renowned neuroscientist Beau Lotto reveals the truths of human perception and devises a cognitive toolkit for how to succeed in a world of uncertainty.

Perception is the foundation of human experience, but few of us understand how our own perception works. By revealing the startling truths about the brain and perception, Beau Lotto shows that the next big innovation is not a new technology: it is a new way of seeing.

In his first major book, Beau Lotto draws on over a decade of pioneering research to show how our brains play tricks on us. With an innovative combination of case studies and optical- and perception-illusion exercises, DEVIATE will revolutionise the way you see the world. With this new understanding of how the brain works and its perceptive trickery, we can apply these insights to every aspect of life and work. DEVIATE is not just an engaging look into the neuroscience of thought, behaviour and creativity: it is a call to action, enlisting readers in their own journey of self-discovery. 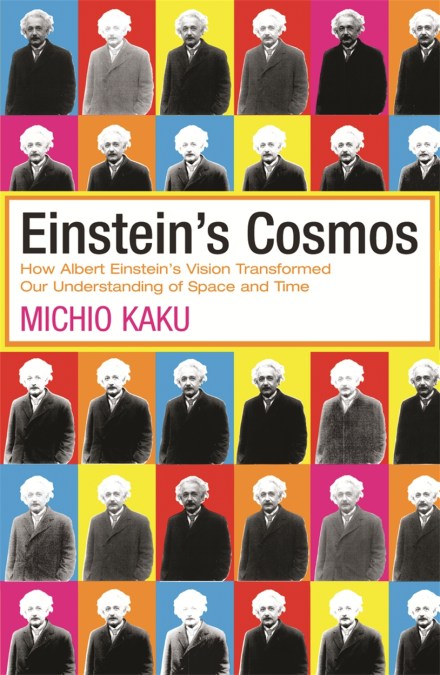 Few figures loom as large as Albert Einstein in our contemporary culture. It is truly remarkable that a man from such humble beginnings, an unemployed dreamer without a future or a job, who was written off by his professors as a hopeless loser, could to dare to scale the heights he reached.

In this enlightening book Michio Kaku reasseses Einstein’s work by centering on his three great theories – special relativity, general relativity and the Unified Field Theory. The first yielded the equation E =mc² which is now such a fixture in our culture that it is practically a ubiquitous slogan. But the subsequent theories led to the Big Bang theory and have changed irrevocably the way we perceive time and space.

Michio Kaku gives a new, refreshing look at the pioneering work of Einstein, giving a more accurate portrayal of his enduring legacy than previous biographies. As today’s advanced physicists continue their intense search to fulfill Einstein’s most cherished dream, a ‘theory of everything’, he is recognised as a prophet who set the agenda for modern physics. 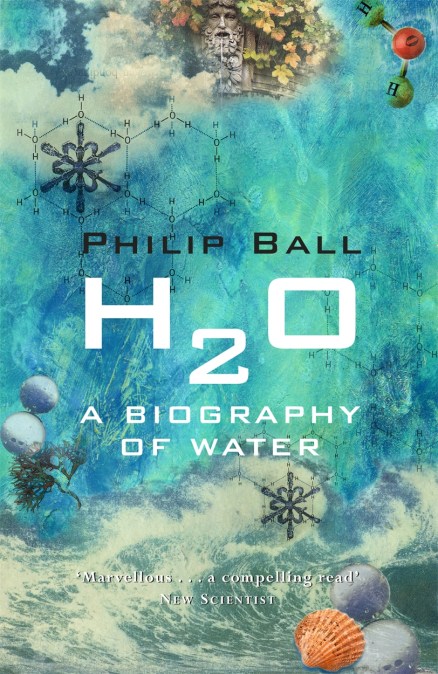 by Philip Ball
The brilliantly told and gripping story of the most familiar – yet, amazingly, still poorly understood – substance in the universe: Water.

The extent to which water remains a scientific mystery is extraordinary, despite its prevalence and central importance on Earth. Whether one considers its role in biology, its place in the physical world (where it refuses to obey the usual rules of liquids) or its deceptively simple structure, there is still no complete answer to the question: what is water? Philip Ball’s book explains what, exactly, we do and do not know about the strange character of this most essential and ubiquitous of substances.

H20 begins by transporting its readers back to the Big Bang and the formation of galaxies to witness the birth of water’s constituent elements: hydrogen and oxygen. It then explains how the primeval oceans were formed four billion years ago; where water is to be found on other planets; why ice floats when most solids sink; why, despite being highly corrosive, water is good for us; why there are at least fifteen kinds of ice and perhaps two kinds of liquid water; how scientists have consistently misunderstood water for centuries; and why wars have been waged over it.

Philip Ball’s gloriously offbeat and intelligent book conducts us on a journey through the history of science, folklore, the wilder scientific fringes, cutting-edge physics, biology and ecology, to give a fascinating new perspective on life and the substance that sustains it. After reading this book, drinking a glass of water will never be the same again. 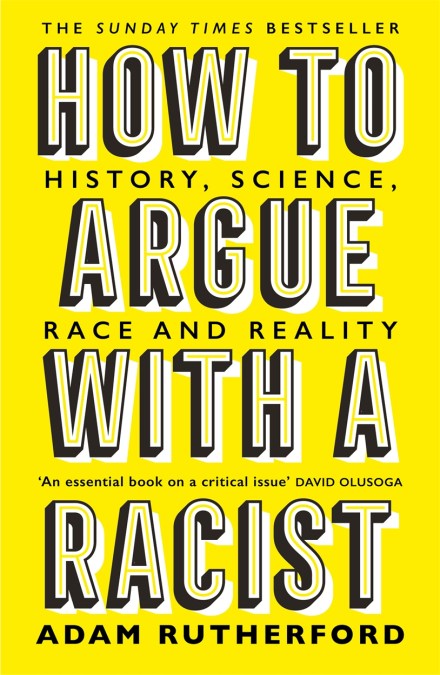 How to Argue With a Racist

Racist pseudoscience may be on the rise, but science is no ally to racists. Instead science and history can be powerful allies against bigotry, granting us the clearest view of how people actually are, rather than how we judge them to be. HOW TO ARGUE WITH A RACIST dismantles outdated notions of race by illuminating what modern genetics can and can’t tell us about human difference. It is a vital manifesto for a twenty-first century understanding of human evolution and variation, and a timely weapon against the misuse of science to justify racism.

Updated edition includes a new Preface from the author 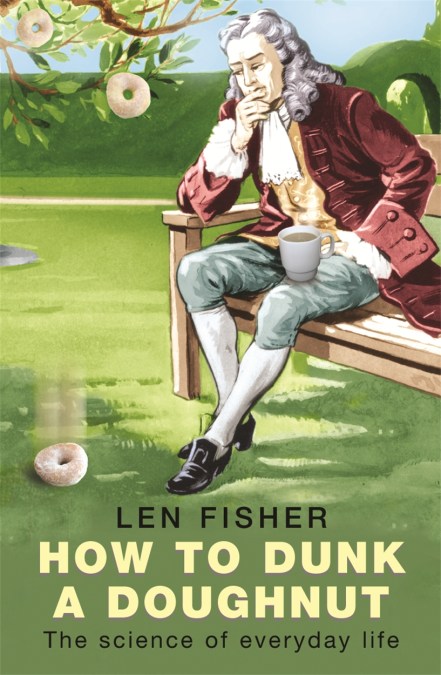 How to Dunk a Doughnut

by Len Fisher
Len Fisher is a finalist for the prestigious Global Challenges New Shape prize.


Fun, quirky popular science from the winner of an IgNobel Prize for achievements that cannot or should not be reproduced.


Science is all around us. In this brilliant, entertaining book, Len Fisher provides scientific answers to familiar questions such as how to boil the perfect egg, how to catch a ball, the physics of sex, and why some vegetables absorb more gravy than others.

In doing so, he reveals the world of the scientist – how they think, what they do, and how they go about doing it – proving that even the most commonplace activities can be used as a key to understanding the laws of nature and that experimental science can be fun!
Next Page