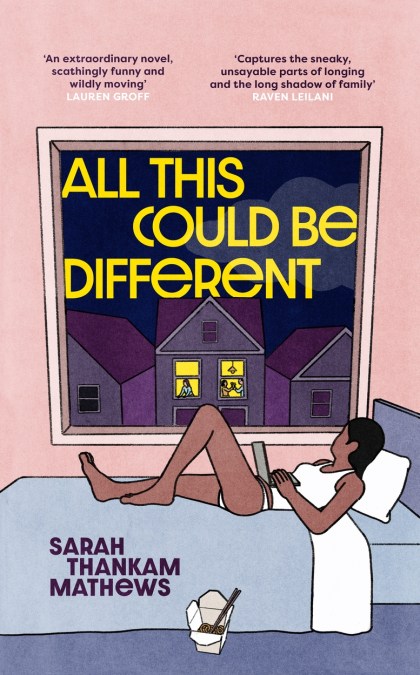 All This Could Be Different

‘Some books are merely luminous . . . this one is iridescent’
Susan Choi, author of Trust Exercise

‘This is not a story about work or precarity. I am trying, late in the evening, to say something about love, which for many of us is not separable from the other shit.’

This is a novel about being young in the 21st century.
About being called a ‘rockstar’ by your boss because of your Excel skills.
About staying up too late buying furniture online, despite the threat of eviction hanging over you.
About feeling like all your choices are mortgaged to the parents that made your life possible.
About the excitement of moving to a new city: about gay bars, house parties and new romances.
About a group of friends – about Sneha, Tig and Thom – and how that can become a family.
About love and sex and hope.
About knowing that all this could be different. 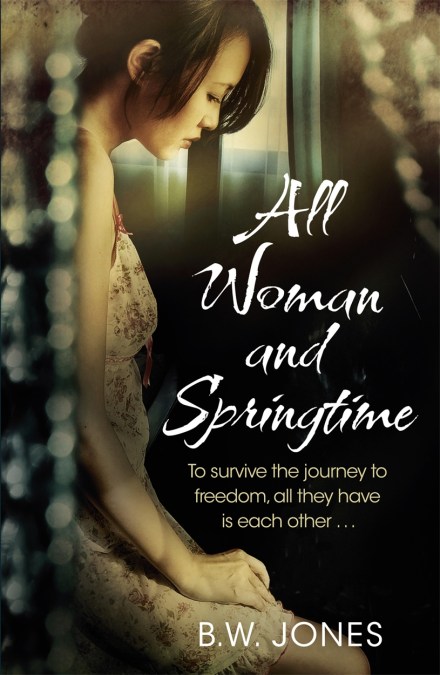 All Woman and Springtime

by B.W. Jones
In the tradition of A THOUSAND SPLENDID SUNS, a sweeping tale of friendship, hardship and redemption set in North Korea.

Gi lives behind North Korea’s iron curtain under the watchful eye of Dear Leader. As an orphan, growing up on a diet of thin soup and propaganda, life is a constant struggle against hunger and fear. But when she meets headstrong Il-sun, tender Gi finds consolation in another human being for the first time, and their unlikely friendship grows as deep as the bond between sisters.

Everything changes when they fall victim to a people trafficker and are indentured into the sex trade, first south of the border and then in America. The hardships they face on their journey from East to West test them to the very limits of what it is possible to endure.

Perfect for fans of Khaled Hosseini and Chris Cleave, heart-wrenching but ultimately redemptive, ALL WOMAN AND SPRINGTIME provides an unforgettable insight into the most mysterious and unknown country on earth, and in Gi paints a portrait of a young woman who loses everything but refuses to be destroyed. 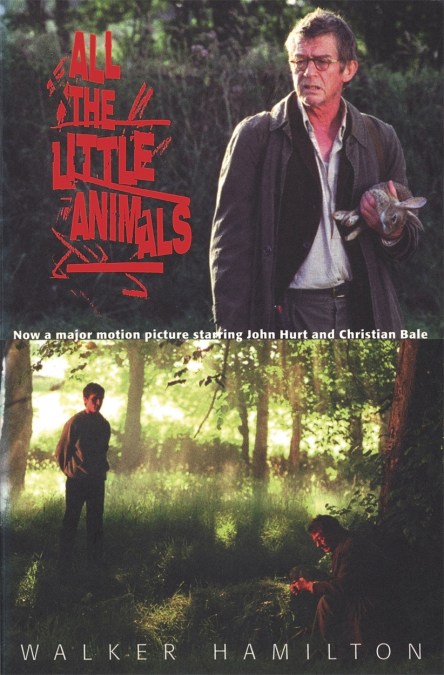 All the Little Animals

by Alexander Hamilton
A moving and unique novel.

Bobby is a 31-year-old man with the mind of a small, frightened boy. Mr Summers is a gentle killer who can never be caught. Together they are the most bizarre pair ever to take pity on the little animals – or plot a savage execution …

First published in 1968, this frightening tale of human depravity and violence has now been made into a film starring John Hurt and Christian Bale. 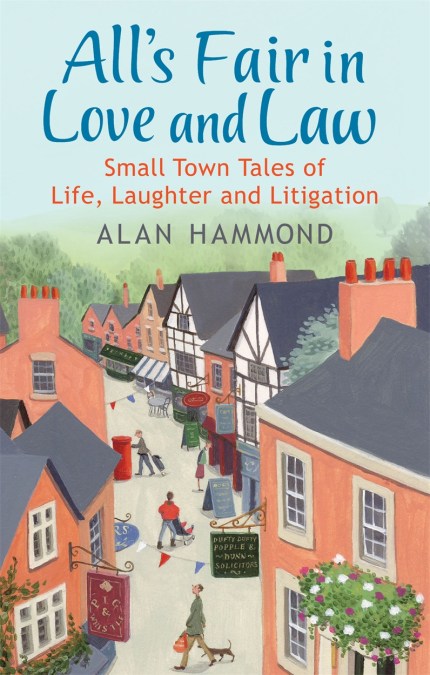 All's Fair in Love and Law

by Alan Hammond
Humorous and heart-warming tales of English rural life centred on a traditional firm of country solicitors, perfect for fans of Rumpole of the Bailey and James Herriot.

Dufty Dufty Popple & Dunn is a traditional solicitors firm in the small Midlands town of Hockam (pronounced Hokum, as the local residents are at pains to point out). This heart-warming collection of stories revolves around the lives, relationships, triumphs and failures of the good people of Hockam and of the lawyers to whom they look for help.

We meet the lonely dentist and his noisy neighbours, the TV celebrity chef and his complex family, the policeman and his beloved budgies, the Vicar and the Major General, the greedy beneficiary of an uncle’s will. These and many others bring their problems to Dufty Dufty Popple & Dunn to be resolved by the long-suffering and well-meaning members of the firm, all of whom have their own lives to live when time permits, from Bernard, the hapless trainee, to Hugo Dufty, the nominal senior partner. And then, of course, there are the ever-present rumours concerning Robert Popple, the former partner who departed from the firm some years previously in mysterious circumstances.

The whole symphony of life portrayed here is conducted with gentle humour and charm by Hugo’s father, Charles Dufty, who founded the firm 50 years ago and whose wisdom and deep understanding of the human condition help to make sense of even the most difficult and apparently insoluble problems.

In this humorous and touching debut collection, Alan Hammond paints a timeless portrait of life in a rural English town. Welcome to Hockam. 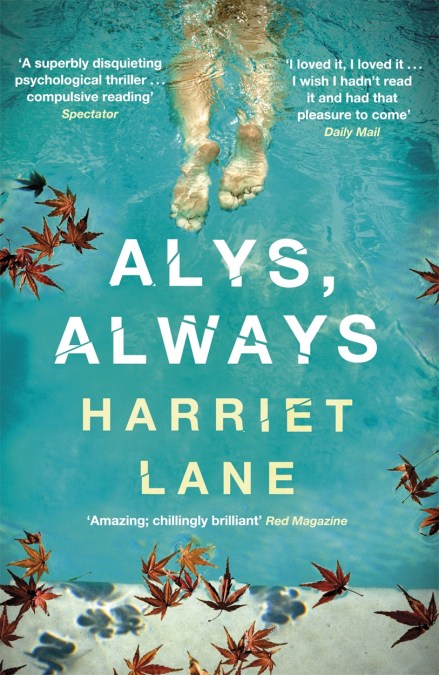 by Harriet Lane
‘A marvellous novel. I absolutely adored it … So subtle, funny, tender and so miraculously observed … Utterly brilliant’ Jilly Cooper

‘A superbly disquieting psychological thriller … Mordantly funny, yet chilling, this tale of an ordinary woman inveigling her way into a position of power is compulsive reading’ SPECTATOR

They have everything she wants…

Frances is a thirty-something lowly sub-editor, but her routine, colourless existence is disrupted one winter evening when she happens upon the aftermath of a car crash and hears the last words of the driver, Alys Kyte.

When Alys’s family makes contact in an attempt to find closure, Frances is given a tantalising glimpse of a very different world: one of privilege and possibility. The relationships she builds with the Kytes will have an impact on her own life, both professionally and personally, as Frances dares to wonder whether she might now become a player in her own right …

‘Frances is a fascinating creation: determined, deceitful, intriguingly complex and believably drawn … This deeply unsettling but eminently readable story is one that will linger in the memory‘ OBSERVER

‘Lane’s take on contemporary class is so sharply observed that it becomes almost satirical: the perennial theme of social climbing gets a superb new treatment in her highly entertaining, slightly chilling tale of a cuckoo in the nest’ SUNDAY TIMES

‘Superbly, even poetically written with an almost feverish hyper-realism, this All About Eve for our times misses no telling detail of the difference between the entitled and unentitled classes… A brilliant idea, brilliantly realised. I loved it, I loved it. I’ve run out of superlatives and all that remains to say is that I wish I was you; I wish I hadn’t read it and had that pleasure to come’ Wendy Holden DAILY MAIL 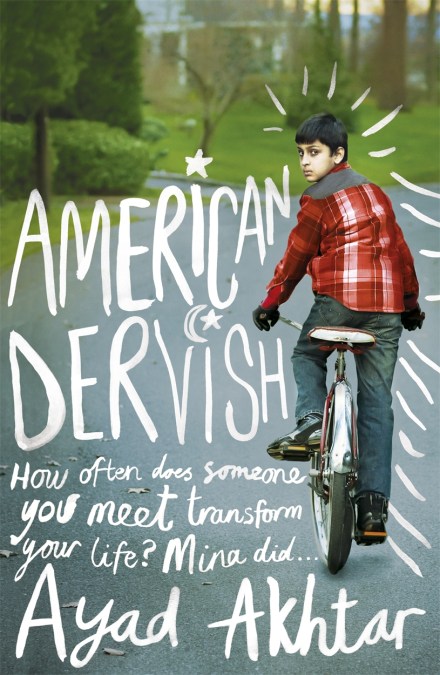 HOW OFTEN DOES SOMEONE YOU MEET TRANSFORM YOUR LIFE?

Hayat Shah was captivated by Mina long before he met her: his mother’s beautiful, brilliant friend is a family legend. When he learns that Mina is leaving Pakistan to live with the Shahs in America, Hayat is thrilled.

Hayat’s father is less enthusiastic. Ever wary of fundamentalism, he doesn’t relish the idea of Mina’s fervid devotion under his roof.

What no one expects is that when Mina shows Hayat the beauty of the Quran, it will utterly transform him.

Mina’s real magic may be that the Shah household becomes a happy one. But when Mina catches the eye of a Jewish doctor and family friend, Hayat’s jealousy is inflamed by the community’s anti-Semitism – and he acts with catastrophic consequences for those he loves most. 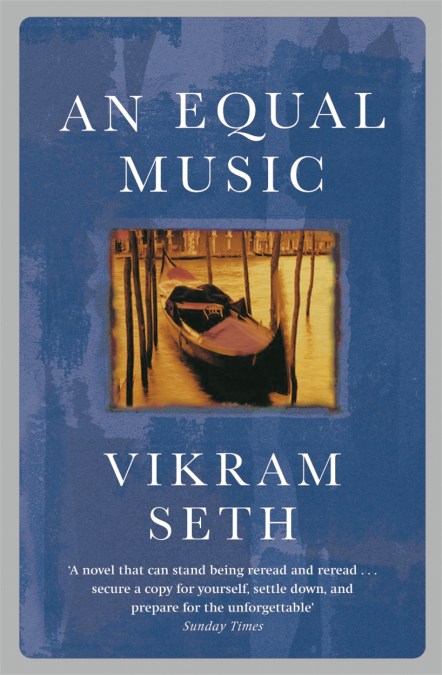 ‘An extraordinary book’ Independent on Sunday

A chance sighting on a bus; a letter which should never have been read; a pianist with a secret that touches the heart of her music . . . AN EQUAL MUSIC is a book about love, about the love of a woman lost and found and lost again; it is a book about music and how the love of music can run like a passionate fugue through a life. It is the story of Michael, of Julia, and of the love that binds them.

‘A novel that can stand being reread and reread, but the first time round is an emotional cliffhanger … secure a copy for yourself, settle down, and prepare for the unforgettable’ Sunday Times 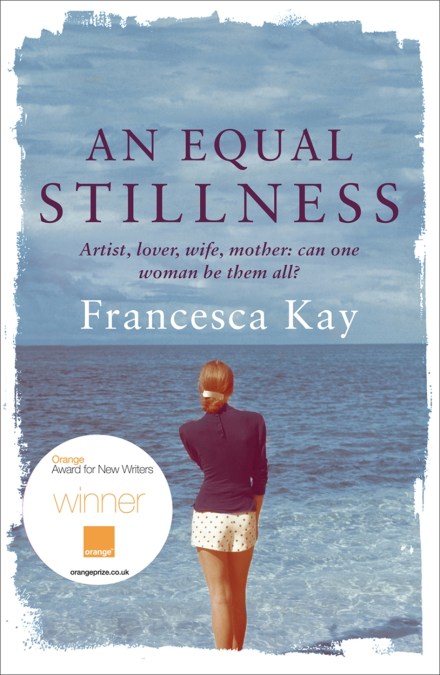 Artist, lover, wife, mother: can one woman be them all?

Born in 1924, Jennet Mallow grew up with a disillusioned mother and a father haunted by memories of war. But Jennet has a talent – and a passion – for art. When she meets the handsome painter David Heaton they begin a tempestuous affair which takes them from the dank terraces of London to a bohemian artistic community in St Ives. But as Jennet’s career flourishes, her relationship with David suffers – with potentially tragic consequences . . .

‘The most beautiful, accomplished debut I have read for a long time . . . It is a powerful novel by a supremely talented artist’ OBSERVER 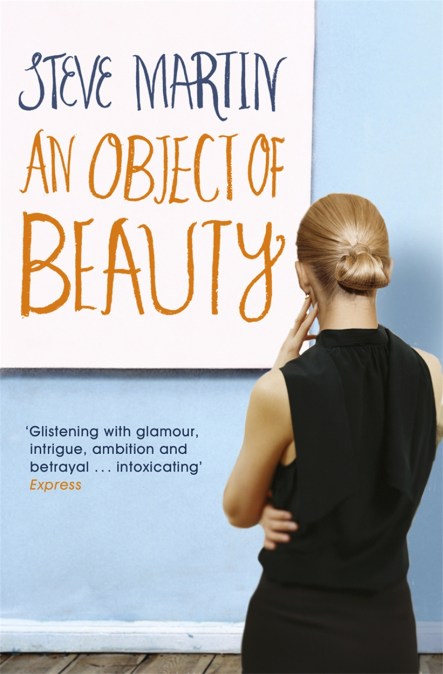 An Object of Beauty

by Steve Martin
An irresistible look at the glamour and subterfuge of New York’s art world, from bestselling author and Hollywood star Steve Martin.

Lacey Yeager is beautiful, captivating, and ambitious enough to take the New York art world by storm. She begins her career at Sotheby’s, amidst the winks and nods of the fabulously wealthy. But hungry for more – and pursued by a whiff of scandal – Lacey migrates to edgy Downtown, watching Hirsts and Warhols multiply in value before her eyes.

Charming men and women, old and young, rich and even richer, Lacey’s ascendancy seems assured. But when the art world bubble looks set to burst, a secret from her past rears its head, threatening to undermine everything she has worked for… 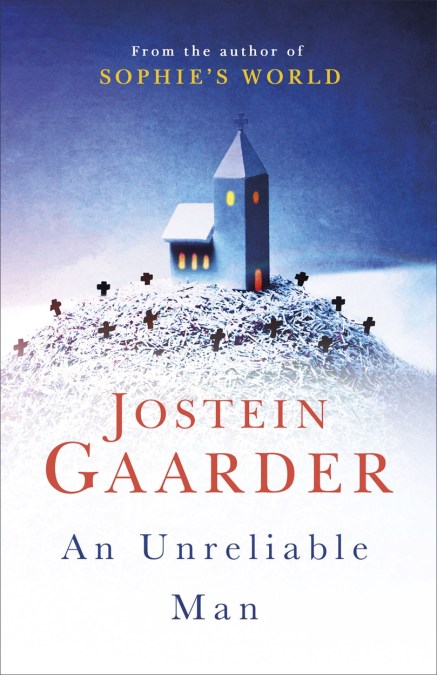 by Jostein Gaarder
From the creative genius of Jostein Gaarder, author of modern classic Sophie’s World, comes a novel about loneliness and the power of words

Jakop is a lonely man.

Divorced from his wife, with no friends apart from his constant companion Pelle, he spends his life attending the funerals of people he doesn’t know, obscuring his identity in a web of improbable lies.

As his addiction spirals out of control, he is forced to reconcile his love of language and stories with the ever more urgent need for human connection.

An Unreliable Man is a moving and thought-provoking novel about loneliness and truth, about seeking a place in the world, and about how storytelling gives our lives meaning.

Decades after his global bestseller Sophie’s World, Jostein Gaarder has written a poignant and funny book for our times – full of life and hope. 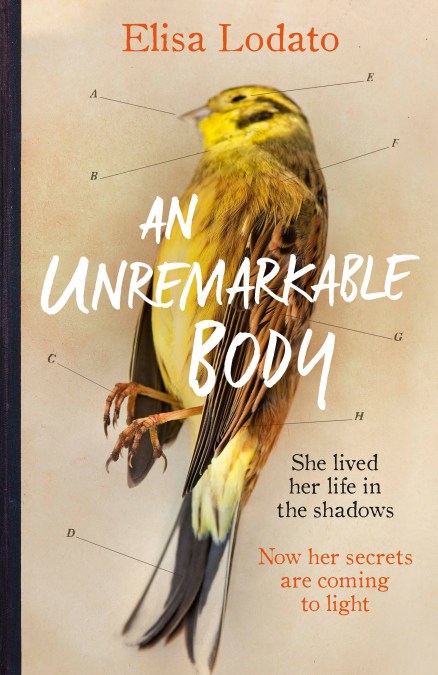 EVERY MOTHER IS A WOMAN WITH A PAST

‘A haunting debut about grief, loss and motherhood’ The Pool

‘An intriguing tale of love, loss and missed opportunities . . . written with verve and delivers an amazing twist’ Sunday Mirror

‘Tender and moving, this part-thriller, part-memoir will leave you floored’ Emerald Street

When Katharine is found dead at the foot of her stairs, it is the mystery of her life that consumes her daughter, Laura.

The medical examiner’s report, in which precious parts of Katharine’s body are weighed and categorised, motivates Laura to write her own version of events; to bear witness to the unbearable blank space between each itemised entry.

It forces her to confront a new version of the woman she knew only as her mother – a woman silenced by her own mother, and wronged by her husband. A woman who felt shackled by tradition and unable to love freely.

With the heart of a memoir and the pace of a thriller, An Unremarkable Body reveals an overwhelming desire to make sense of an unfulfilled life – and to prove that an unremarkable body does not mean an unremarkable life.

‘An incredibly moving story of maternal love, sacrifice, and how little we know those closest to us’ Chloë Mayer, author of The Boy Made of Snow 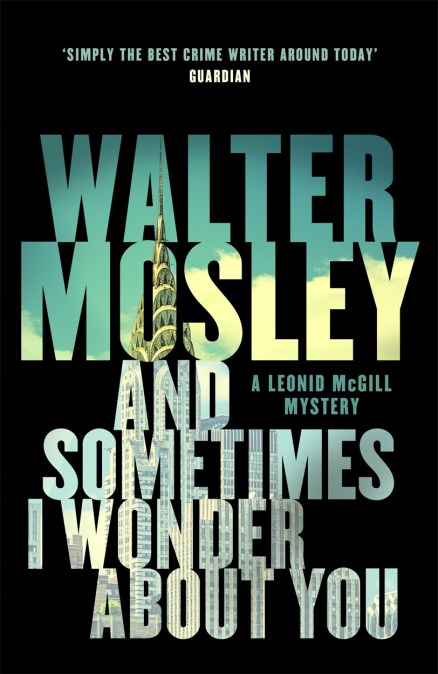 And Sometimes I Wonder About You

by Walter Mosley
IN NEW YORK, IF YOU HAVE A PROBLEM NO ONE ELSE CAN SOLVE, YOU CALL LEONID McGILL

Ex-boxer, hard drinker, in a business that trades in cash and favours, McGill’s an old-school P.I. working a city that’s got fancy all around him.

When McGill is approached by a small-time office manager to track down his long lost cousin, he declines the case. He can almost smell the desperation on the man. But then McGill’s office is broken into, and his potential client is found dead. Soon, McGill finds himself drawn into the underbelly of an establishment family, and a Pandora’s box of secrets and lies.

Taking you from the moneyed haunts of Uptown to the shady streets of Downtown, Mosley is the Chandler of Obama’s America, and one of the finest crime writers in the world.
Previous Page Next Page