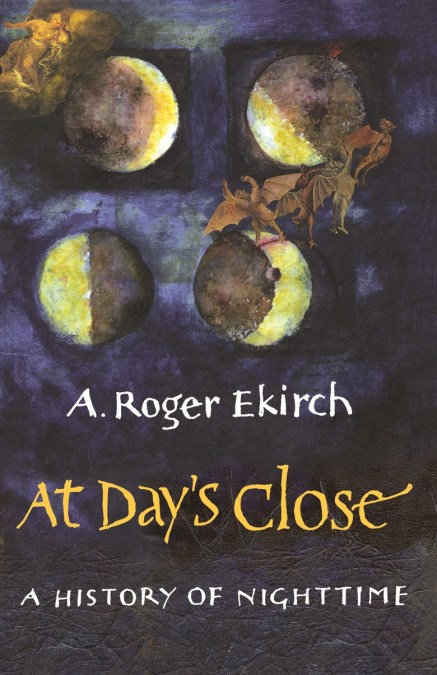 by A. Roger Ekirch
A fascinating and colourful social history of the nighttime in the pre-Industrial era.

AT DAY’S CLOSE charts a fresh realm of Western culture, nocturnal life from the late medieval period to the Industrial revolution.

The book focuses on the cadences of daily life, investigating nighttime in its own right and resurrecting a rich and complex universe in which persons passed nearly half of their lives – a world, long-lost to historians, of blanket fairs, night freaks, and curtain lectures, of sun-suckers, moon-cursers and night-kings. It is not only the vocabulary that has disappeared, AT DAY’S CLOSE will restitute many facts which have been either lost or forgotten. It is a significant and newsworthy contribution to social history, filled with substantial research, stories and new discoveries.

Ekirch uses a wide range of sources to reconstruct how the night was lived in the past : travel accounts, memoirs, letters, poems, plays, court records, coroner’s reports, depositions and laws dealing with curfews, crime and lighting. He has analysed working-class autobiographies, proverbs, nursery rhymes, ballads and sermons, and folklore, as well as consulting medical, psychological and anthropological papers. 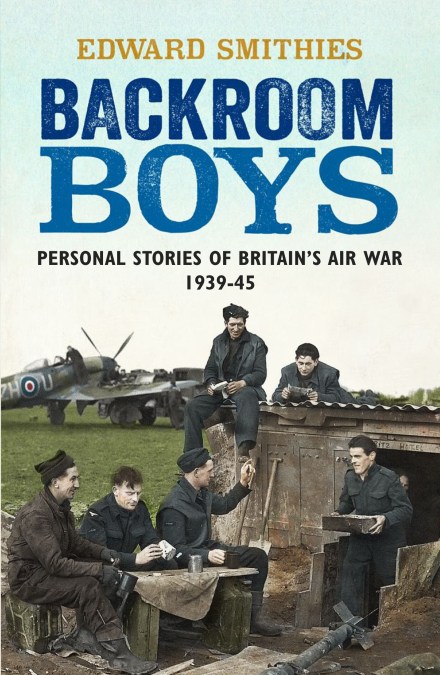 by Edward Smithies
When we remember the Second World War in the air, we think of fighter pilots and bomber crews. But what was it like for the men and women working as ground crew and in the aircraft factories who also played a crucial role in defeating Hitler? What was it like making history? What sense did these individuals have of what they were doing, either at the time or later? Did they feel they were caught up in the tide of great events? Or were they simply doing their demanding and often dangerous duty? 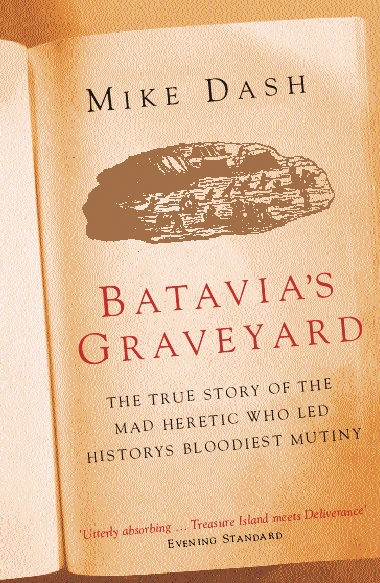 by Mike Dash
The true story of the mad heretic who led history’s bloodiest mutiny – ‘An adult version of LORD OF THE FLIES that is, moreover, entirely true’ Evening Standard

When the Dutch East Indiaman Batavia struck an uncharted reef off the new continent of Australia on her maiden voyage in 1629, 332 men, women and children were on board. While some headed off in a lifeboat to seek help, 250 of the survivors ended up on a tiny coral island less than half a mile long. A band of mutineers, whose motives were almost beyond comprehension, then started on a cold-blooded killing spree, leaving fewer than 80 people alive when the rescue boat arrived three months later.

BATAVIA’S GRAVEYARD tells this strange story as a gripping narrative structured around three strong principal characters: Francisco Pelsaert, the cultivated but weak-willed captain; Jeronimus Cornelisz, a sinister apothecary with a terrifying personal philosophy influenced by Rosicrucianism who set himself up as the ruler of the island; and Wiebbe Hayes, the only survivor with the courage to fight Jeronimus’s band. The background to these events, including the story of the Dutch East India Company, and the discovery of Australia, is richly drawn. 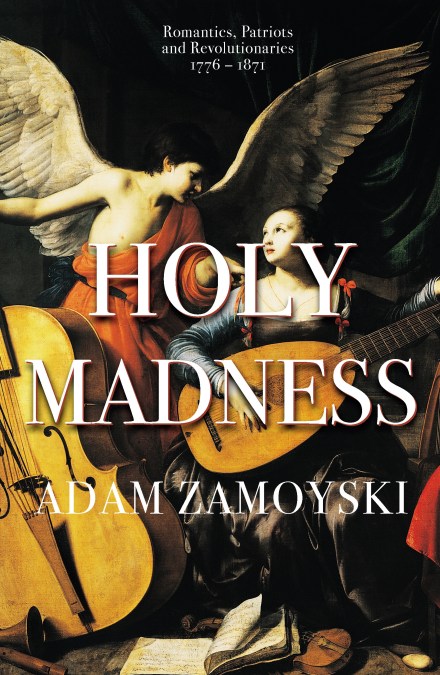 by Adam Zamoyski
From America’s fight for independence to the Paris Commune – an exotic collection of fanatics, adventurers, poets and thinkers are brought vividly to life.

Holy Madness probes into the psyche that was responsible for so many of the founding events of our modern world, and into the instincts that inspired its most generous and most murderous impulses. It explains how the Enlightenment dislodged Christianity from its central position in the life of European societies and how man’s quest for ecstasy and transcendence flooded into areas such as the arts, spawning the Romantic movement.

This dramatic journey which begins in America in 1776 and goes right up to the last agony of the Paris Commune in 1871, takes in the French revolution, the Irish rebellion, the Polish risings, the war of Greek liberation, the Russian insurrection, the Hungarian struggles for freedom, the liberation of South America, and the Italian Risorgimento.

‘An ambitious and in many ways brilliant book’ Hilary Mantel 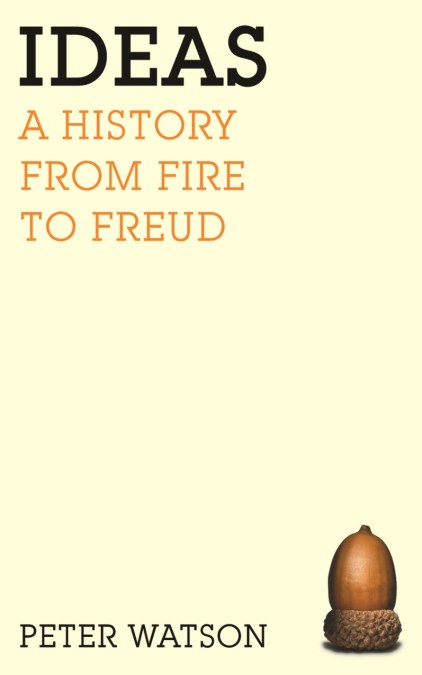 by Peter Watson
A highly ambitious and lucid history of ideas from the very earliest times to the present day.

In this hugely ambitious and exciting book Peter Watson tells the history of ideas from prehistory to the present day, leading to a new way of telling the history of the world. The book begins over a million years ago with a discussion of how the earliest ideas might have originated. Looking at animal behaviour that appears to require some thought: tool-making, territoriality, counting, language (or at least sounds), pairbonding.

Peter Watson moves on to the apeman and the development of simple ideas such as cooking, the earliest language, the emergence of family life. All the obvious areas are tackled: the Ancient Greeks, Christian theology, the ideas of Jesus, astrological thought, the soul, the self, beliefs about the heavens, the ideas of Islam, the Crusades, humanism, the Renaissance, Gutenberg and the book, the scientific revolution, the age of discovery, Shakespeare, the idea of Revolution, the Romantic imagination, Darwin, imperialism, modernism, Freud right up to the present day and the internet. 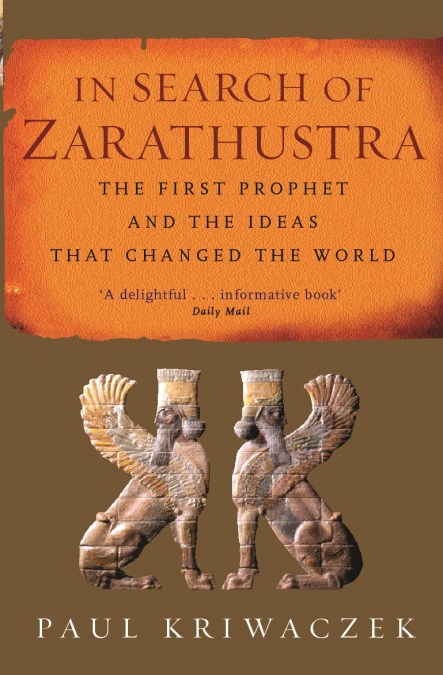 In Search Of Zarathustra

by Paul Kriwaczek
A quest to find the most influential religious teacher in the ancient world: Zarathustra.

IN SEARCH OF ZARATHUSTRA is a quest to trace the influence of the prophet the Greeks called Zoroaster and considered the greatest religious legislator of the ancient world. Long before the first Hebrew temple, the birth of Christ or the mission of Muhammad, Zarathustra had taught of a single universal god, of the battle between Good and Evil, of the Devil, Heaven and Hell, and of an eventual end to the world.

Over several decades, Paul Kriwaczek, an award-winning television producer, has cast his eye across Europe and Central Asia, from Hadrian’s Wall to the Oxus river, from the Pyrenees to the Hindu Kush.

Passing via Nietzsche’s interpretation of Zarathustra for a post-religious age, the Cathars of 13th-century France, the Bulgars of 9th-century Balkans, and the prophet Mani’s revision of Zarathustra’s message in the later Persian empire, Paul Kriwaczek then explores the religion of Mithras – before going back past Alexander the Great’s destruction of the Persian Empire, and the era of the great Persian kings Cyrus and Darius in the 6th century BC, to the beginning of the first pre-Christian millennium. 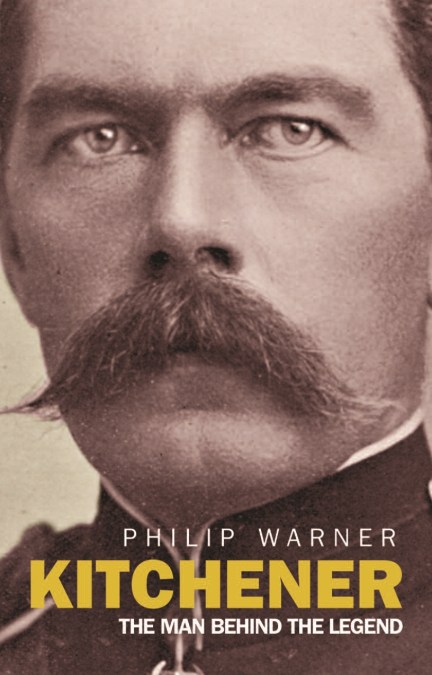 Kitchener was one of the most successful generals Britain has ever had, and yet he has always been a mystery. Legends proliferated about him in his lifetime, and the circumstances of his death have remained an enigma. Not until recently, with the fresh material which has come to light, has it been possible to find the real person behind that enormous, intimidating moustache.

In this absorbing study Philip Warner shows us exactly what a debt Britain owes to Kitchener. Far from being the remote, austere figure of the placards, he was a daring adventurer and spy, a meticulous planner and a commander who took his place at the front of the battle. He was trusted by civilians; worshipped by his men, and detested by most of his officers.

Philip Warner had exclusive access to the papers of the Kitchener family while researching this book, and spoke to the few people still alive who knew the man personally. The result is the definitive biography of this most important yet least known of British generals. 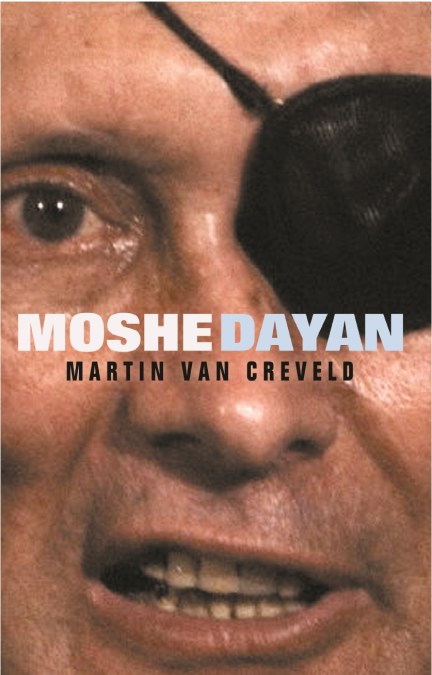 by Martin van Creveld
Martin van Creveld’s Moshe Dayan tells the story of one man and of one people, to whom he was a figurehead – a symbol of their patriotism and their determination to survive. Born in a kibbutz in 1915, Dayan joined the Hagana when he was just fourteen, thus starting early a military career that saw him serve in every war fought in the Middle East from the War of Israeli Independence in 1948 to the Yom Kippur War of 1973. Twice he led his country’s forces into smashing victories. Having planned and executed the one and directed the other, with his one eye he towers over them like Nelson over the Battle of Trafalgar.

Skilled in battle, skilled in diplomacy, like many powerful public figures, Moshe Dayan’s private life was far from mundane. The book quotes from little-known sources, including an account written by one of his mistresses, that reveal much about his character and his life away from the battlefield. This is an honest portrayal of both the private and the public figure, which seeks to understand a man whose contribution to the state of Israel in its developing years was immeasurable. 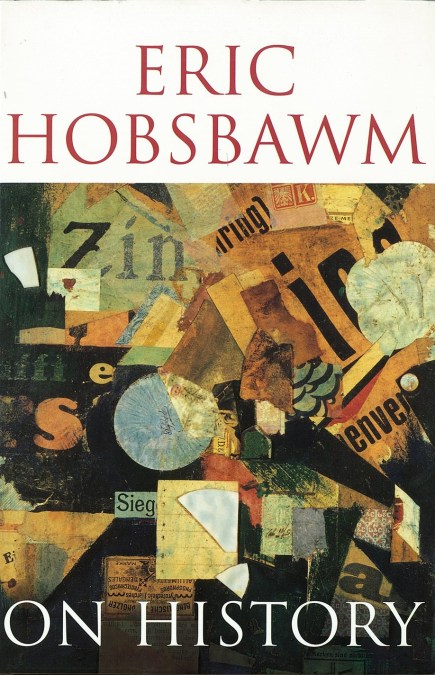 by Eric Hobsbawm
The theory and practice of history and its relevance to the modern world, by Britains greatest radical historian. 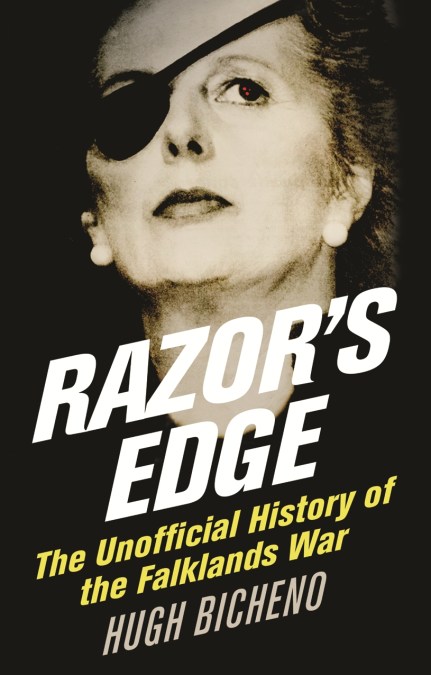 For five years before the Falklands War, Hugh Bicheno was one of the top British spies in Argentina. As such, he gathered hard, corroborated intelligence on Argentine intentions over the Falklands – which the British establishment then chose to ignore. The reasons behind this British decision, and its disastrous and inevitable consequences in the South Atlantic, are the main story of this book.

There were three main players in the war, each of them trying to overcome their own cultural baggage. The Argentines were riddled with guilt: after years of fighting a morally repugnant campaign against its own people, the Argentine military saw a war for the Malvinas islands as a perfect opportunity to win back their self-respect. The hands of the Americans were also bloody from the likewise dirty wars they had sponsored and abetted in Central America. For Britain it was simply the last straw after decades of humiliation. 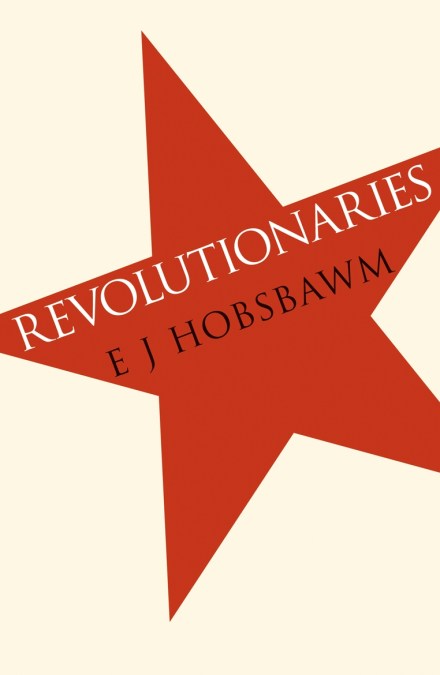 by Eric Hobsbawm
A collection of essays which represent a lifetime’s writing,lectures & thoughts on revolutionary modern political developments throughout Europe. 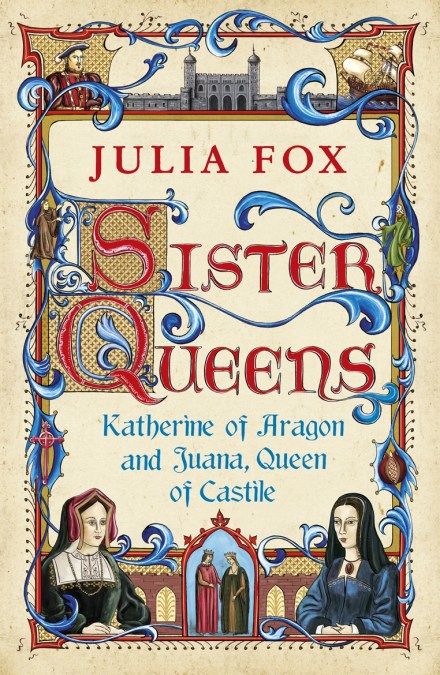 by Julia Fox
The first dual biography of Katherine and Juana of Aragon, based on a comprehensive re-evaluation of the sources

Katherine of Aragon, Henry VIII’s first bride, has become an icon: the betrayed wife, the revered Queen, the devoted mother, a woman callously cast aside by a selfish husband besotted by his strumpet of a mistress. Her sister, Juana of Castile, wife of Philip of Burgundy and mother of the Holy Roman Emperor Charles V, the most powerful man in Renaissance Europe, is still more of a legend. She is ‘Juana the Mad’, the wife so passionately in love with her husband that she could not bear to be parted from him even by death, keeping his coffin by her side for year upon year.

They were Sister Queens – the accomplished daughters of Ferdinand and Isabella, the founders of a unified Spain. A gripping tale of love, sacrifice, the demands of duty and the conflict between ambition and loyalty – at a time when even royal women had to fight for their positions in society – Julia Fox’s vibrant new biography teems with life. Linked not only by blood but by cruel experience, their dual stories enrich our understanding of them both, casting a searchlight onto the turbulent age in which they lived.
Next Page